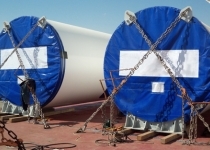 A full ship was chartered by the Netherlands based ALS Project Office, with a complete load of 21 wind turbine towers between the port of Sfax in Tunisia and the south Croatian port of Sibenik.

ALS successfully fulfilled a complete charter vessel within the Mediterranean area. The full load was shipped on a 8000 tonne multipurpose geared vessel.

In the load port of Sfax in Tunisia, along with the ships cranes, ALS ocean crew team also rented a heavy mobile crane unit to safely load the 21 tower segments aboard the ship, both under deck as well as partly on the weather-deck of the ship.

The loading operation ran smoothly and within 48 hours the loading and lashing was complete. After a short Mediterranean crossing, the ship arrived at the dedicated discharge terminal in Sibenik.

Upon arrival, it was then the role of the leading special transport and craneage company in Croatia, that provided the necessary unloading equipment, craneage work as well as the special trailers, to immediately discharge the conical-shaped tower segments on the basis of 'direct take-out'.

Transport to the final job site inland South Croatia for erection of the wind farm was also executed by same company. The job was operated successfully and cargo was delivered with a very satisfactory outcome for the customer and ALS teams.

Croatia and its hinterland are very actively working on the creation of numerous wind farms across the Balkan countries and thus will remain an important market for ALS whereby the above shipment was the first of many to come in 2011.

ALS' renewable energy division have now successfully operated a multiple series of land transport movements in the wind-energy sector, as well as many specific logistics and operational projects and are subsequently placed as a considerable player in this industry.